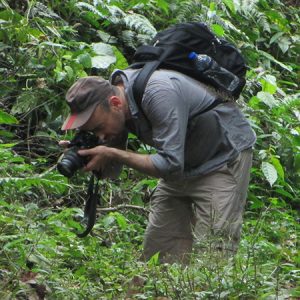 Hi .. I’m Bernard or ‘Bob’ (as I’m more commonly called) Golden. I’m an Irish photographer who specializes mainly in landscape and wildlife photography in Ireland and South America – although I also turn his able hands to portraits, commercial and food photography. I also very much enjoy environmental portraits and creating photographic documentaries mostly relating to culture, travel and the natural world. I grew up in Ireland with a love for the outdoors, exploring the hills of Wicklow mostly, on bike, on foot, in rain and shine for the last 30 years. A love of nature and adventure has brought me to some incredible places in the world most notably the jungles, rivers, mountains, and coasts of Central and South America. My appreciation for the beauty and sometimes harshness of nature is what I like to capture in my photography. You can read about some of my work and adventures in my blog – read more >>

Bob’s work has appeared on Irish TV; in various magazines including the renowned Forbes; Vogue (US edition); The Economist; in newspapers such as The Guardian (UK), The Sun (UK), The Telegraph (UK), The Irish Times; and on commercial and editorial websites around the world.

Bob uses Nikon bodies and prefers crop-sensors for the extra distance they provide when shooting wildlife. He uses Nikon, Tamron and Sigma lenses and enjoys the advantages each brand offers. Most of Bob’s workflow and editing is done through Adobe Lightroom CC with occasional editing done with Photoshop.